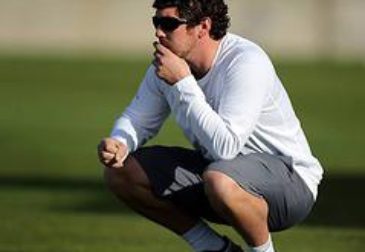 Derek Pedrick enters his first year as the Head Coach of the Arizona Mens Lacrosse “Laxcats.” Pedrick was hired in the summer of 2013. Pedrick brings eight years of collegiate coaching to Tucson all of those which were in the NCAA. Prior to coming to Tucson Pedrick spent the last three years at Division II Notre Dame de Namur. In 2011 they won their conference and had both the offensive and defensive player of the years for their conference. Before his time at NDNU, Pedrick Coached the 2009-2010 seaon at Division One Siena College in upstate NY. In his first season, Pedrick helped guide Siena to a 12-5 overall record and a perfect 8-0 league record. Pedrick arrived from The College of Wooster (Ohio) where he served as assistant coach from 2007-09. During his time there, Wooster recorded its highest win total (11-3) in school history and its man-up unit ranked 12th in the nation. Prior to that, Pedrick was an assistant coach at Trinity College (Conn.). Pedrick helped lead Trinity to a 3rd place finish in the NESCAC. Pedrick was a four-year letterwinner at Springfield College (2002-05), playing in 67 career games and recording 83 points (72 G, 11 A). He won three league championships (2003-05) and the ECAC Tournament (2002) while playing for the Pride. Pedrick served as student assistant coach for Springfield College in 2005. He earned his bachelor’s degree from Springfield College in 2006. Pedricks brother played at UMASS and helped them to the division 1 national championship game in 2006.